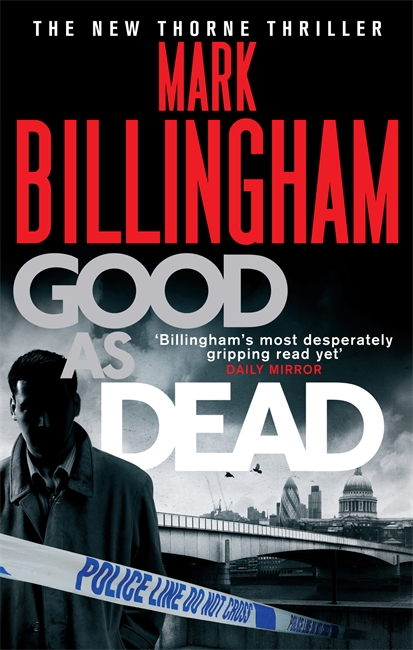 Taut and tense, with an unusually sympathetic hostage-taker’
The Times

The best thrillers make you see familiar territory in a new light.
Mark Billingham has always done that
Sunday Telegraph

With his crowd-pleasingly maverick approach, Thorne would have been as popular as the new Met Commissioner: give David Morrissey the uniform, and let Billingham write his lines
Daily Telegraph

This may well be Billingham’s best book yet… Billingham has a shrewd sense of timing, which he puts to excellent use, especially with a neatly orchestrated series of jaw-dropping surprises towards the end of the novel. Thorne becomes more and more interesting with every book
The Spectator

Mark Billingham takes the familiar elements of the police-procedural novel and makes them interesting in a way few other bestselling crime writes can manage. Good as Dead is as exciting as any thriller, but it has a serious side that makes it much more than that
Times Literary Supplement

A clever writer, Billingham ratchets up the tension and sustains it brilliantly throughout the book as Thorne, racing against time, begins to uncover a shocking chain of events involving corruption and exploitation at the highest level
Daily Mail

Another top offering from Billingham
The Sun

Just as we become used to (and are perhaps wearying of) the influx of foreign crime novels, here comes Mark Billingham with a thoroughly British police thriller
Time Out

A good mix of action and detection, making the book both chilling and clever, the perfect combination for a crime novel
The Scotsman