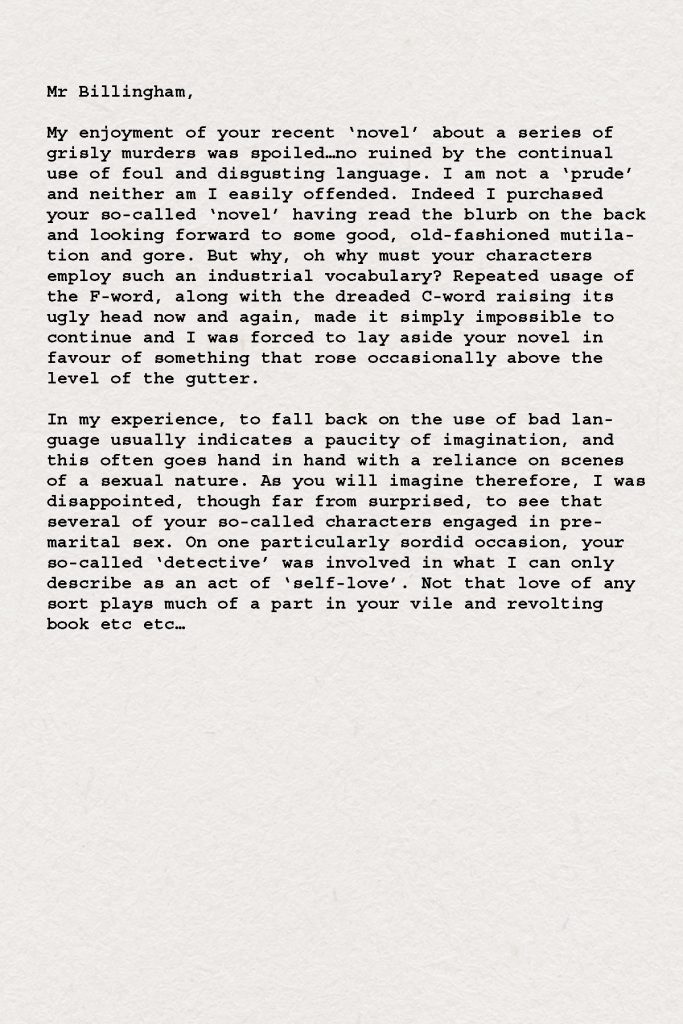 It’s hard to believe, and not just because they seem so fond of using the expression ‘so-called’, or know what the word ‘paucity’ means, but this is typical of letters or e-mails I have received on many occasions in the last few years. The obvious response, and one which I have had to fight the temptation to fire straight back at these people, is pithy, not to say highly appropriate. But instead, I have simply seethed, or bitched about it at conventions, which is as close as I get to maintaining a dignified silence. After all, there seems little point trying to engage with people whose mindset is far more twisted and immovable even than my own.

No matter how many times I hear this kind of thing – and it is perhaps worth stating for the record, that the majority of these correspondents are (A) female and (B) American – I’m still shocked by the strength of feeling. Why should a few bad words and a spot of rumpy-pumpy ruffle anyone’s feathers to this extent?

More to the point, why should it do so in such a context?

Fine. If your favoured reading matter is no racier than the bible (not that this doesn’t have its fair share of ‘smitings’ and ‘oaths’ and assorted beardy types in flowing robes ‘knowing’ one another all over the place) then you might well be shocked by the average medium/dark/dark-as-all-hell crime novel. If you like your murders solved by detectives called ‘Whiskas’ or ‘Mr Tibbles’, then you have every right to be mildly offended by stuff you might find in one of my books. But…if knowing full well what the subject matter of such books is, you are still shocked and disgusted by a little bad language, then frankly you are an idiot, whose sense of values is way overdue for a service. Just how skewed does your worldview have to be, before you find it acceptable to read about death and dismemberment but are offended if those who come close to it swear now and again? Or go home and have a drink to cope with the trauma? Or, heaven forbid, sleep with someone they haven’t known for very long?

It has, on occasion, been suggested that my books, and those of other equally depraved writers, should be issued with warning stickers, like those on the front of many rap albums. You know the sort of thing:

THIS NOVEL ABOUT A SERIES OF BRUTAL SLAYINGS ALSO CONTAINS CURSE-WORDS AND SCENES INVOLVING TOILET PARTS.

I would be perfectly happy with this. As long as the people making these demands are forced to wear stickers themselves. These should be large, square and fluorescent. They should be stuck to their foreheads. They should read:

FUCK ALL IN HERE.

Every so often, they’ll run a questionnaire, in a magazine or newspaper, in which a celebrity answers quirky questions, designed to give readers a snapshot of their personality. ‘How would you like to die?’ ‘Have you ever been unfaithful?’ Insightful stuff like that. Sometimes the subject will be asked ‘what is your favourite word?’ Invariably, the answer will be something like ‘gossamer’ or ‘bibulous’ or – on one particularly nauseating occasion – ‘mittens’. Not once have I seen anyone own up to loving what is perhaps the single most useful word in the English language.

You are about to read a collection of stories that goes a long way towards redressing the balance.

Come on now, put your hands together and give it up for our F-guest of honour. The King of curses; the Sultan of swearing. It’s a cracking word, isn’t it? A beautiful, evocative, glorious word, and one that cedes ground to no

other – least of all ‘mittens’ for crying out loud – when it comes to sheer versatility.

“Fuck you, you fucking big fucker.”

It’s a verb, it’s a noun, it’s a whatever-you-want. How can you not love a word like that? If on some level, you are unable to appreciate a sentence like the one above, then you have no poetry in your soul. In fact, I seriously wonder what is in the souls of those that so despise these four, wonderful letters. I’ve always suspected that those who make a song and dance about how offended they are by bad language, have pictures in their heads that would make Caligula go green and chuck up his chips. I’m convinced that many who claim to be disgusted by the depiction of honest, dirty love-making, go home and piss on each other while listening to Sting and wearing clown masks.

I am delighted that it was on hearing me rant about these kinds of double-standards, that Jennifer Jordan felt inspired to put EXPLETIVE DELETED together, but I know that many other writers trying to tell stories set, you know, in the real world receive the same sorts of criticism. It’s wonderful that so many of them, sharing my sense of outrage, jumped at the chance to come on board and let rip.

Boy, have they ever let rip.

What a dark, disgusting and fabulous treat lies in store within the pages of this vile and appalling book…

From a seedy, New York hotel room to a somewhat grander one in Budapest; in African sunshine and Glaswegian rain, an astounding line-up of writers have taken the simplest and most tempting of briefs and run amok. There are paedophiles, porn-stars and hit-men. There are set-ups and screw-ups; bank-jobs and blow-jobs. For reasons I don’t begin to understand the rock group AC/DC appears twice, as does the television series “Lost”, and for those who think ‘noir’ demands a firearm or three, there are guns put into places where guns simply do not belong.

There is fuckage and fuckery a-plenty, and of course a lot of people get comprehensively fucked in one way or another. People, and things. I’m not sure that any animals come in for the stick they deserve, but that may be put right in a follow-up volume.

As for the word itself, yes it would be safe to say that it is writ large throughout, and with passion. Though at least one story features no bad language whatsoever, there is no shortage of those words that make some people hot under the collar. I have not actually done a count, but I reckon it would come somewhere between the last Harry Potter book and Brian De Palma’s screenplay for “Scarface”. So, if anyone has been perverse enough to buy this collection just so they can complain about it, they had better make sure they have a lot of notepaper.

And some might simply have wanted to annoy the sorts of people who get upset by this type of thing and fire off holier-than-thou emails to mystery writers.

Which seems like a good enough reason to me.